This has been a loooooooong time coming... Consider this the gearsix.net v2 launch. Here's how I got it to this point.

This site has been one of my passion projects for quite a few years now. It started back on Google Sites (which surprisingly hasn't joined the Google Graveyard yet). 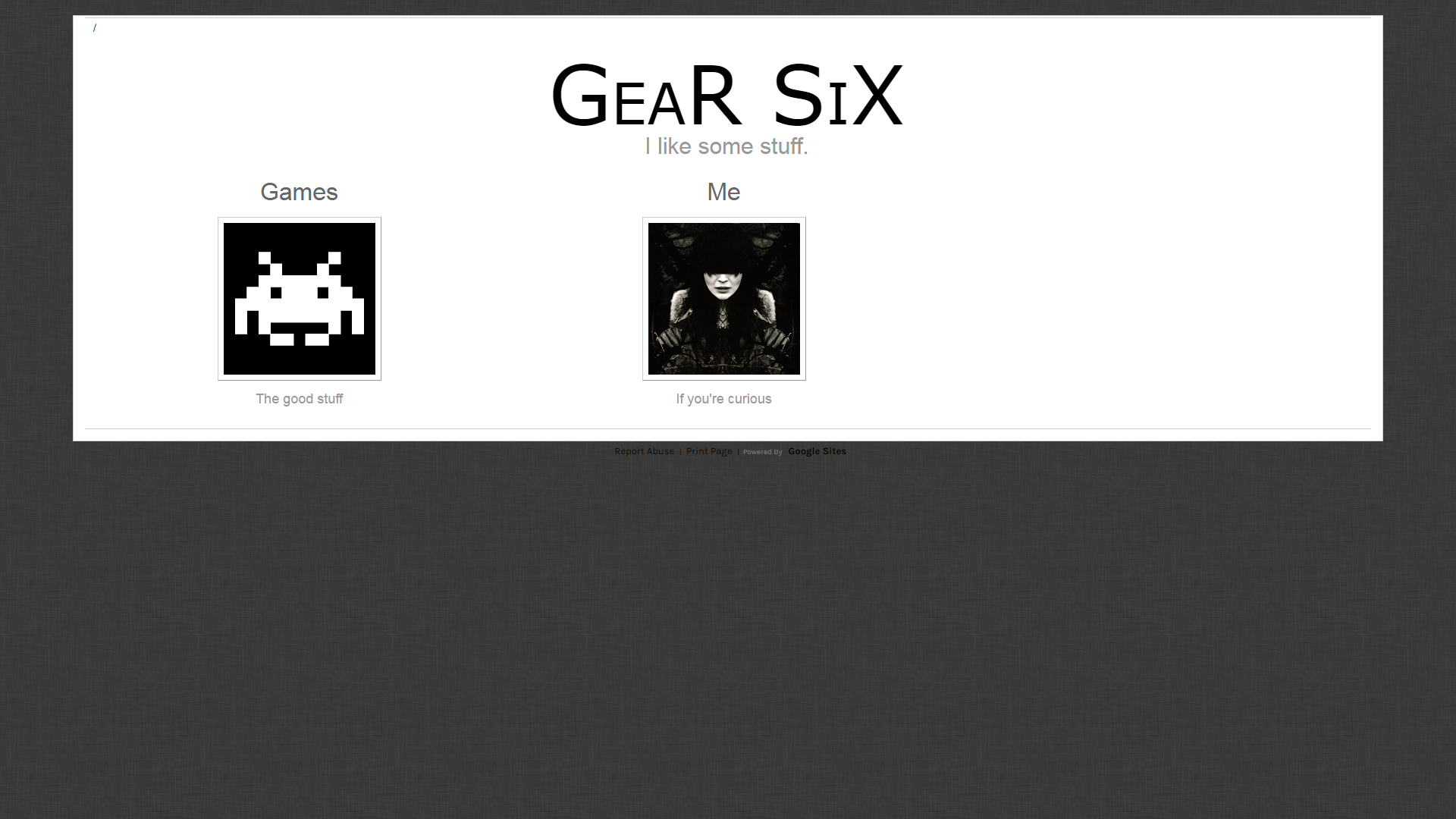 It was pretty basic - built ontop of one of the pre-built templates, which I can't remember the name of but it didn't look much different, its where I got the background panel that I use almost everywhere now though (see the background used in the byuu theme: low_contrast_linen.png.

I didn't really know what I wanted to do with the website, so I just started by adding "stuff i like". I had started to play with the HTML, just copy/pasting bits because it was quicker than doing via the Google Sites editor.

I lost interest before the site was finished.

This version of the website came about after my first year at university, during the summer holiday. I used it after finding Neocities, which was really the inspiration for me to start learning how to build a website from scratch (I'm still using it as my host to this day! circa. 2020).

I already knew how to program in 2-3 languages and was familair with the syntax so it wasn't hard. Getting my head around how webpages are built from the bottom up was the main goal.

It's also unfinished. Again I didn't really know what I wanted to do with the site, although I had a better idea than I did in version 0 but (again) lost interest before finishing it. I never got around to doing the project pages. I didn't even end up finishing the "stuff i like" pages, mostly because filling them out was pretty boring. The end-goal of finishing those pages was to use them for my own reference when choosing something to watch/play/listen to though.

Re-creating my own version of the template in version 0 was pretty fun though and the site's fairly resonsive (despite purposely avoiding @media queries). This design was later adapted to the "wrapped" theme in version 2. The one thing it taught me is that doing a website with just HTML/CSS from scratch is pretty tedious when you want to using the same page layout for multiple pages.

Here we are, version 2. This took a lot of work, mostly because I ended up making it as difficult as possible for myself. This was after i'd graduated and found myself with a lot of free time after work (being a student doesn't grant you much free time outside of lectures and drinking).

The first thing I did to make use of this free time was play a lot of video games. After doing that for a few months, I decided that I needed something creative to do (work wasn't scratching the itch). I started by spending a fair bit of time messing about with linux stuff, which can very easily become a time vampire thanks to the endless changeability of the platform. After that deciding to stop messing about with that, I created dotfm. Then I decided I wanted to create this site, somewhere that I can host all of my projects, write about them and other things, share whatever I thought would be worth sharing, etc.

Here's the prototype, the layout was very much adapted from version 1.

After creating this prototype I realised I was going to have a fairly big problem. How do I create this site? I was planning to have multiple articles and projects, so creating it by hand wasn't really an option since deciding to change any of the HTML after creating those pages would be an absolute nightmare. Well there are several options for getting around that:

Okay, great. So why did it take me about a year to do?

I ended up being way too fussy and decided to make my own static site generator in a language I didn't know so that I could use my newly-found creative energy to learn a new language and create a new tool. If you want to know more about the tool I built, then I'll have some pages on that soon too (it's named swc). That's where most of the time went, the rest was me going overboard designing this thing.

As you can see I've created multiple CSS themes for the site, which required building the HTML in a way that would be able to easily adapt to multiple styles - making sure content wasn't wrapped in div soup. I might have gone overboard (if you're literate in CSS, have a look at the hack I did to get borders on the .post elements in the "wrapped" theme).

Anyway, as you can see gearsix.net is finally here and I'm pretty happy with it. Hopefully content will keep flowing, if anything this site should serve as a motivation to make sure it does!